The Winter Smoking Room is located inside the Castle’s Clock Tower and was completed in 1874, as part of the expansion of the Castle by the 3rd Marquess of Bute and his architect, William Burges.

Admission to the Winter Smoking Room is only available by joining a guided tour. 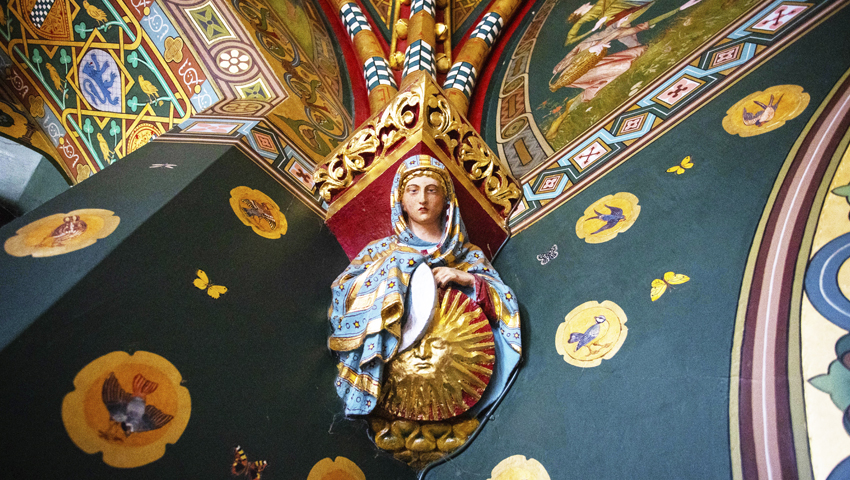 Take a virtual look around the Winter Smoking Room at Cardiff Castle.

A smoking room was generally used as an entertainment space for the gentlemen of the household, a place to retire after dinner to smoke, drink and play parlour games. The buffet on the east wall contains plenty of storage space for both alcohol and cigars.

The theme of the room is the passage of time. On the ceiling, the twelve signs of the zodiac represent the months of the year and they were painted by the artist, Fred Weekes. The six stained glass windows depict Norse Gods, after whom the Saxons named the days of the week.

In the four corners of the room, small carved figures represent times of day. On the east wall is sunrise, whilst the opposite corner shows noon. Dusk and night are represented by the Moon Goddess on the north wall.

The chimneypiece is made of carved stone, which has been painted and decorated with pure gold leaf. It shows the figure of ‘Love’ on the hood, whilst beneath, lovers hunt, skate and sit beside a winter fire.